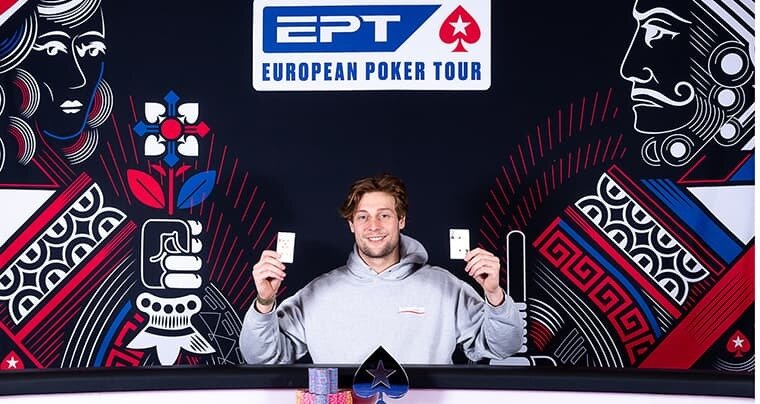 The delayed European Poker Tour (EPT) Prague festival is underway in the Czech Republic and dozens of American superstars have made the journey to Europe to play for massive prizes. A €25,000 buy-in No-Limit Hold’em Single Day High Roller took place on March 9 and drew in a star-studded crowd. Netherlands’ Teun Mulder emerged victoriously with a €250,928 ($273,259) prize in two.

The tournament saw 35 players buy in and create an €857,500 ($933,811) prize pool. Such a compact field meant only the top six finishers received a slice of the pot. Such luminaries as Stephen Chidwick, Timothy Adams, and online poker legend Niklas Astedt fell before the money place. However, at least they did not pop the money bubble.

Thomas Muehlocker had that dubious honor bestowed on him when he ducked out in seventh-place. Mulder min-raised to 32,000, Muehloecker called from the big blind, leaving himself only 27,000 chips behind. Those chips went into the pot on a Kd-5d-4h board with Qc-7c with Mulder calling and holding As-8c. The 4s turn and Ah river condemned Muehloecker to a seventh-place finish.

American superstar Nick Petrangelo was the first in-the-money player to fall by the wayside. A short-stacked Petrangelo doubled through Mulder to give himself some breathing room. However, he busted in sixth for €58,830 ($64,065) ending any hopes of an epic comeback. Petrangelo called all-in from the big blind with the lowly 6c-2c after Juan Pardo opened to 50,000 with Ad-7s. The board ran Kd-Qd-Js-6h-As to send Petrangelo to the showers.

Ole Schemion only had three big blinds with Petrangelo busted. Unsurprisingly, he was the next player heading to the cashier’s desk. Mulder opened to 50,000, Schemion called, and the board fell Js-Qc-5c. Schemion check-raised all-in over Mulder’s continuation bet, and was instantly called. Schemion’s 9s-5s needed some help against Mulder’s Qd-4d but it never arrived. The German walked away with €75,630 ($105,240).

The tournament become an all-European affair after American Zhuang Ruan fell in fourth. Ruan came unstuck when he three-bet all-in for 12 big blinds after Pardo opened. Pardo showed 6s-6c, Ruan the 5s-5d, with the board running 2c-4s-9d-8c-7d. Ruan headed into the night with €96,640 ($105,240) fourth-place prize money.

Striking a Deal and a Blind All-in

Pardo and Mulder agreed to battle for 30-minutes before looking at a potential deal. Pardo initially pulled away but Mulder closed the gap and even led at one stage. The heads-up players went on a scheduled break having agreed to an ICM deal. However, poker tournaments require a winner, so the players decided to do a blind flip to determine the winner and recipient of the trophy.

The players moved all-in and exposed one of their cards: Pardo the Jh and Mulder the 7h. A Tc-Td-6c flop and a Th turn saw both players reveal their other hole cards. Mulder held Kc-7h and Pardo Jh-9s. The river was the 4h, and Mulder took down the first high roller event of EPT Prague.

The prize money Mulder received represents a career-high in the live arena for the Dutch star. His victory denied Spain’s Pardo what would have been a fourth EPT title. Both players now focus their attention on the €5,300 buy-in Main Event.