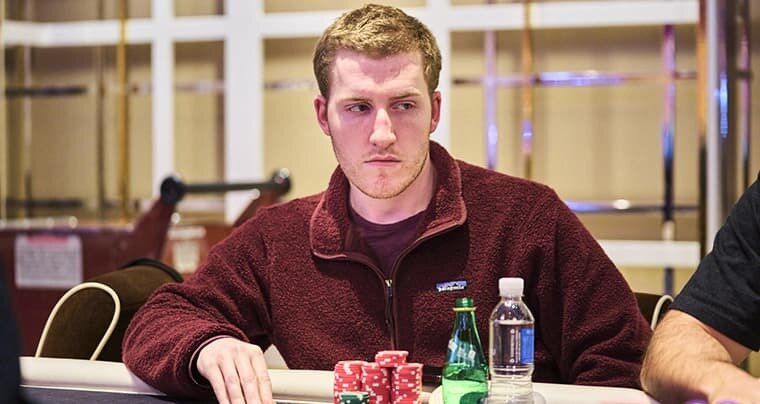 Benjamin Diebold is on cloud nine having got his hands on the largest live poker tournament score of his career. Diebold reeled in a $96,810 payout plus an additional $14,000 worth of bounties.

The South Carolina native outlasted 199 opponents in the $3,000 No-Limit Hold’em Bounty event, part of the Wynn Millions festival. He eliminated 14 opponents on his way to victory, with each bust out awarding $1,000.

The tournament paid out 20 places, and some superb players made it that deep. Chino Rheem was the first in-the-money player heading for the exits. Matas Cimbolas, Ryan Laplante, and reigning WPT Player of the Year Jacob Ferro also cashed.

Diebold Second In Chips at the Final Table

Daniel Couzens led the final nine into battle, with Diebold second in chips. Michael Lim busted in ninth place and banked $8,925. Lim shoved for 11 big blinds with Ah-Jh and ran into the As-Ks of Albert Nguyen. A Th-Qs-Qd-6c-7c board sent Lim home earlier than he wanted.

Nguyen crashed out in eighth despite eliminating Lim. A short-stacked Nguyen shoved with only 8s-4s, and Couzens called with Kd-9d. The Ad-Qd-8d flop left Nguyen almost drawing dead. The 5d turn confirmed Nguyen’s exit and his $10,395 payout.

Seventh-place and $12,257 went to Salim Admon who lost a coinflip with Couzens. Admon pinned his hopes on Ac-Ks and Couzens looked him up with Qs-Qc. Neither player improved on the 4h-Jd-Ts-9c-4c board, ending Admon’s tournament.

Diebold claimed his first scalp of the final table by eliminating the dangerous Adam Hendrix. The latter open-shoved 16 big blinds with Ah-Jc, and Diebold called with Ac-Qh. An 8s-7c-Kc-Qc-4h run-out reduced the player count by on; Hendrix scooped $14,693.

Race For The Title Heats Up

Couzens sent another player to the cashier’s desk, Anthony Marquez. The World Series of Poker (WSOP) bracelet winner moved his short-stack into the middle with 7x-6x on an Ax-4x-5x flop, and Couzens called with Qx-Qx. Marquez played his draw fast but it missed, sending him home in fifth for $18,918.

Ankit Ahuja ran into the hot-running Couzens and busted in fourth for $25,690. Ahuja fired a bet on the Qs-2h-5c flop before shoving the Kd turn. Couzens called both bets with As-6d, which held against Ahuja’s 7c-6s courtesy of the Jc river.

Diebold was the shortest stack as three-handed play began but doubled up with As-9s versus Couzens’ Ah-8d. He got his hands on the rest of Couzens’ stack when his As-Qc prevailed against Ad-Jd courtesy of the Jh-Kd-3d-Qh-9s board.

Uri Kadosh held the narrowest of leads over Diebold, and a cooler hand settled the event. Kadosh four-bet all-in with 9c-9d but Diebold snap-called with As-Ad. An 8h-Qs-Ac-Qh-8d board left Kadosh with a meager 5.5 big blinds.

$75,655 was the largest score for Diebold until this latest victory. He collected that sum after winning the $1,100 Card Player Poker Tour Jacksonville Main Event in 2018. That was only his fourth live cash.

Diebold came close to winning a WSOP bracelet last fall. He finished seventh in the $10,000 No-Limit 2-7 Lowball Championship, which Farzad Bonyadi took down. He followed up four WSOP cashes with a final table appearance in a Wynn Millions High Roller. Bin Weng banked $189,800 that day while Diebold enjoyed a $29,200 haul.